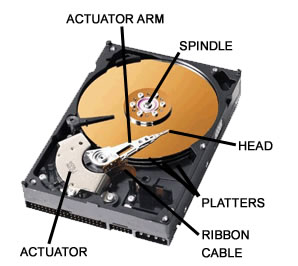 This moves the actuator arm. The actuator is controlled magnetically by a voice coil. In older drives, a device known as a "stepper motor" is used to power the actuator but these were prone to overheating and over time, due to wear-an-tear a failing actuator could corrupt the data. Voice coil powered actuators retain the integrity of the data on the platters much better.

This is the moving arm that holds the read/write heads and accurately positions them on the platters.
Platters - The circular disk(s) on which the magnetic data is stored. The surface is coated with a thin film (or metal oxide on older disks) which stores the data. The platters are probably the most important part of the hard drive as they store the actual data.

The drive head(s) reads/writes data to the disk platters. When in motion the cushion of air generated by the platters causes the heads to glide over the platters without actually touching them. The space between the platters and the drive head is so small that even one speck of dust or a fingerprint could disable the spin. When the drive is turned off the heads come to rest on a predesignated "parking area" on the heads called the "landing zone".

the component attached to the drive motor that spins the platter around. Most spindles move at ether 5200 rpm or 7200 rpm

Carries the data from or to the read/write heads. Failure of the ribbon cable is a rare occurrence.